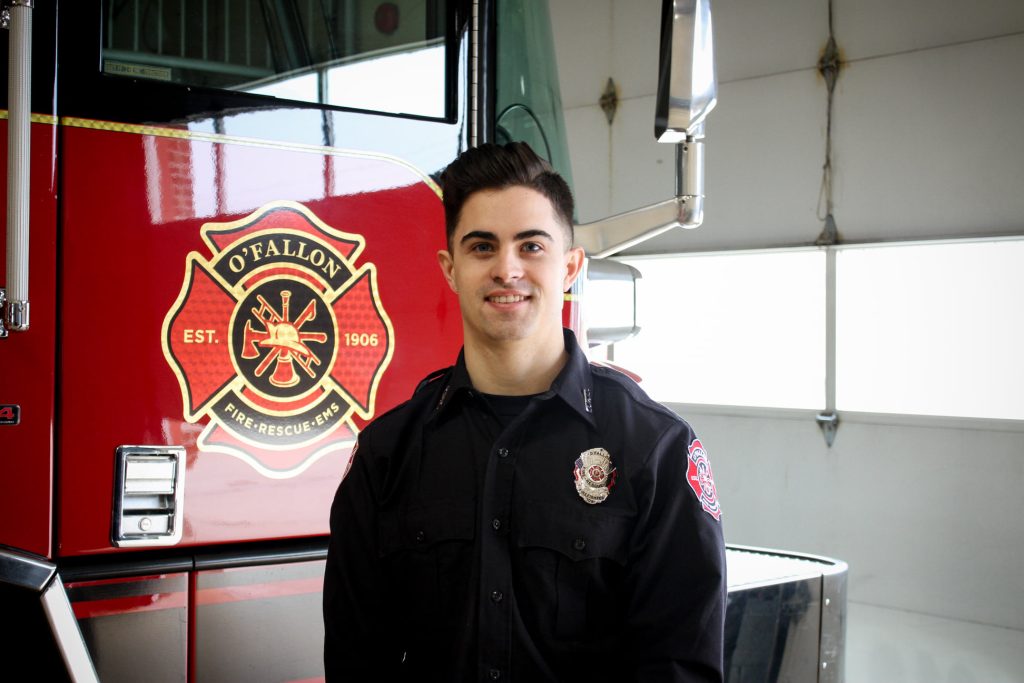 Firefighter/paramedic Jared Swafford was raised in the firehouse. The O’Fallon Fire Protection District firehouse, to be precise.

“I’ve been wanting to follow in my dad’s footsteps since I was little,” he says. “My dad has been a firefighter for 30ish years now. I have grown up in the firehouse and have known since the first grade this is the profession I want to do.

“I have always looked up to my dad because I have always wanted to be a firefighter just like him. Now to be able to accomplish that and be able to work with him is a very good feeling.”

Thanks to his upbringing, Swafford, who was hired by OFPD in January 2022, understands better than most the demands of a firefighter’s 48-hour shift.

“When we’re on duty, it is a home away from home,” he explains. “We do everyday things like the community would do at home, like going to the grocery store, cooking, laundry, watching TV during our downtime. People always think that we just stay up for 48 straight hours, but what many don’t know is we have our own rooms just like they do at home.”

Growing up around the fire service also has given Swafford insight into how the field has been changing over the past few decades. After seeing that most fire districts are moving to ALS pumpers and hiring individuals with EMS experience, he was motivated to pursue his paramedic certification in addition to his Fire I and II certifications.

His favorite part of the job?

“Helping people and being able to give back to the community,” he says.

Swafford recalls one particularly memorable call when he and his crew were able to jump into action for his first clinical save.

“A patient was experiencing a heart attack,” he says. “Our crew was doing everything we could to keep the patient calm and provide the best patient care. Unfortunately, our patient suddenly went unresponsive. Upon checking for a pulse and breathing, it was apparent the patient was in cardiac arrest.”

Swafford and his crew performed CPR and quickly placed AED pads on the patient’s chest to shock the patient and restore a normal heart rhythm. The patient regained consciousness and began talking to the crews before being transported to the hospital, where they walked out a mere four days later.

When not on duty, Swafford enjoys hanging out with friends, playing video games, working out, going hunting, and playing volleyball or baseball.