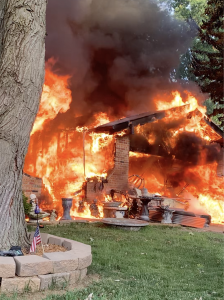 The screams of a trapped resident was the first sound off-duty O’Fallon Fire Protection District (OFPD) firefighter/paramedic Matt Chapman heard when he arrived at a house fire on Wood Oaks Drive in unincorporated St. Charles County Tuesday morning around 6:30 a.m.

Chapman was in his car when he saw smoke billowing into the sky from a nearby house. Following his instinct, he headed toward the house and was the first emergency responder to arrive. He ran toward the screams from a side window and got to work trying to rescue the trapped victim inside. Shortly after, a St. Charles County police officer, St. Charles County Sheriff’s deputy and Central County Fire and Rescue (CCFR) firefighter arrived. The team worked together to get the resident out of the house.

The police officer, sheriff’s deputy and CCFR firefighter were treated for minor injuries and the resident was transported to a local hospital. Other residents of the home escaped before first responders arrived.

“House fires can happen to anyone. Today’s incident reminds all of us of the importance of replacing your smoke alarms every ten years and having a well-practiced home escape plan. We are fortunate that everyone was able to escape today’s fire,” says OFPD Chief Tom Vineyard.