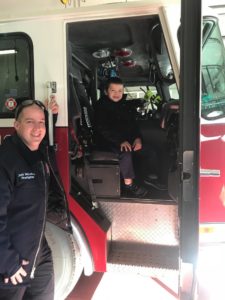 Jeff Woodson comes from a family of firefighters; his oldest brother, stepfather and father-in-law all share the profession.

“I became a firefighter because I wanted to be able to help people through their toughest moments — to be there for them when they needed someone most,” Jeff says, adding that being able to serve in the community he calls home is especially rewarding.

He recalls a time his crew was dispatched to a residence to revive a man in cardiac arrest.

“He made a full recovery against all odds with underlying causes,” Jeff says. “A month later, he surprised my crew and I at the firehouse to eat dinner and meet the first responders who were responsible for saving his life.”

Jeff is a certified paramedic, ACLS provider and PALS provider. In addition to his service at OFPD, he works part-time with the transfer division of the St. Charles County Ambulance District.

In his spare time, Jeff enjoys running, camping, trout fishing, and spending time with family and friends. He and his wife — high school sweethearts from Fort Zumwalt South! — live in O’Fallon with their three children.