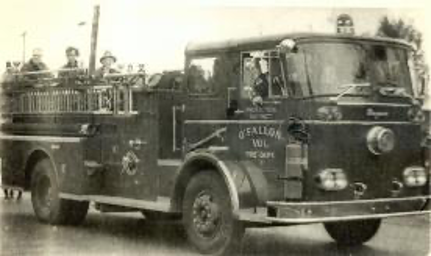 The fire department began to update the fleet, ordering a new Seagraves truck on December 1, 1960, for $23,544, plus $3,347.30 for new hoses and $760.49 for additional equipment. The Seagraves had a pumping capacity of 750 gallons per minute, carried 500 gallons of water in its tank, and allowed for five firefighters in the cab. It was delivered in May 1961.

As growth continued in O’Fallon, a big challenge was firefighters knowing the area and getting directions. So, a system of “run cards” was developed. Each card contained the most efficient route to a fire with turn-by-turn directions from the station. There was one card for every 100 block of every street. Each card was numbered, and a duplicate set was given to the dispatcher. The dispatcher relayed the location of the fire by identifying the run card number. The first firefighter to reach the station pulled the appropriate run card and drove the truck or helped navigate.

Most of the improvements made during the 1960s focused on communication. In April 1963, two-way radios were installed in all the trucks. The following year, the installation of a fire bar system for better and faster communication improved communications.

The public’s ability to contact the fire department was becoming a problem. In the beginning, all telephone calls went through a central operator. When a call came in to report a fire, the operator simply pushed a button to sound the alarm. When the phone company was sold to Lincoln Telephone in the 1940s, they started installing telephones that no longer required a central operator, leaving the Fire Department without someone constantly on duty to take a fire call. At that time and for the next two years, all the emergency fire calls were routed to one of the volunteer’s homes, and a phone chain notified the volunteer firefighters of the fire.

When the Roeper Nursing Home opened on Woodlawn Ave., they began receiving the calls since they were open 24 hours a day. When the Roeper Home closed in 1963, emergency phones were installed in twenty volunteer firefighters’ homes and businesses, all answering the same number, Crestwood 2-3222. When a call came in, someone on the phone circuit would stay on the line until the first firefighter would arrive at the station to pick up the call and get all the information to write it on a chalkboard.

A Community News article dated January 15, 1964, announced the new emergency number for fire calls and impressed upon the readers the importance of using the number for emergencies only. The article reported, “The people taking calls are volunteers at no pay or compensation of any kind. All of these men hold other jobs, some working days and others nights. These men are dedicated to public service and deserve every respect that the community can afford them.”

In 1967, a 30’x 60’ addition for meeting rooms and offices was built on the east side of the station. It included a kitchen and restroom facilities plus a utility room, with most of the finishing work on the interior being done by the firefighters themselves. A 24-hour volunteer weekend duty crew was started for better coverage.

In 1969, the fire chief asked the O’Fallon Board of Aldermen to donate the land to the north and east of the fire station for use as a training area. The site was originally a ball field, complete with lights and bleachers. It had been donated to the city for a new ballpark, but the plans never materialized. The request won the Board’s 8-0 vote, and the city’s attorney was ordered to draw up the papers. The attorney drew up papers to lease the land to the Department, but the lease was rejected by the Department. In the end, the land was finally deeded to the O’Fallon Fire Department.